I'm a writer, a programmer, a Pyrenean Mountain Dog owner and, in my few spare moments, I teach Aikido in North Devon...

But let's talk about the writing.

I've been a writer all my life. I was eleven when I first started selling articles to newspapers and magazines. In the 1980s I became a pop music journalist and interviewed stars ranging from Simon Le Bon and Adam Ant to Randy Crawford and The Weather Girls. I worked for magazines such as Flexipop!, Number One, Kicks and Jackie. After that I moved into computer journalism, writing about programming, editing magazines, doing multimedia presentations and TV.

For a while the 1990s I was a magazine publisher. We published the regular way, with huge print-runs and a complicated distribution network. It cost a small fortune. And now I write programming books (see the Bitwise Books site) and novels... and I publish them myself!

But eeek! (I hear you cry) isn’t self-publishing the same as vanity publishing? Well, that’s certainly the way it used to be perceived in the book publishing world. In the magazine publishing world, with which I am more familiar, independent publishing has no such stigma. Recall that I said I was a publisher myself in the ’90s. To become I publisher, I went into partnership with another reckless fool, we stumped up tens of thousands of pounds of our own hard-earned cash and we printed a magazine called 18 Rated. The major newsagents agreed to distribute it and then had second thoughts (they said the magazine was rude! Ha! Just because it had a picture of a man’s naked bottom impersonating Elvis Presley on the cover!) But we’d already paid for the printing and when newsagents refused to sell the magazine, it cost us a fortune in lost revenues. 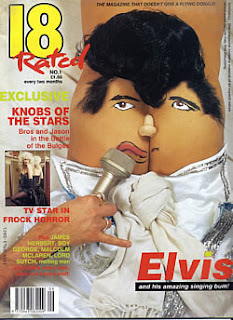 E-Publishing is altogether more civilised. All you need to publish a book is talent and determination. The financial outlays are minimal. I am utterly convinced that this is the face of the future. The whole clunky network of agents, publishers, distributors and bookshops is going to become a thing of the past. Authors no longer need them. We can communicate directly with our readers. Those authors who write books that people want to read will succeed; those who don’t, won’t. And the writer is not at the mercy of the publishers and distributors. They cannot bring you to the brink of financial ruin on a whim...

This blog is devoted to the book publishing experiences of myself and other writers. If you are a writer and you have something you want to say, please contact me. Maybe we can do an interview. If you want to interview me for your blog, well, I'd also be keen to talk.

We are in this together now, so we’d better get to know one another!