If you enjoy apocalyptic and post-apocalyptic fiction or just like to be scared by a good book, you will almost certainly be familiar with the name Iain Rob Wright. With dozens of best-selling books on Amazon, Iain has gained a loyal fan-base of readers eagerly awaiting his next chilling story. Here Iain tells me how he began writing and what is his secret of success…

How did you become a published novelist? Did you decide right away that you would go it alone? Or did you go the traditional route of papering your room with rejection slips?

I knew that traditional publishing would be a long slog filled with disappointment and resentment, so when I learned about KDP, that’s the route I went. I didn’t want someone else’s permission to be a writer and I also wanted things to be immediate.

Has traditional publishing had its day now? I mean, is there any good reason why a writer should go through agents and get deals with publishers?

No. Traditional Publishing isn’t going anywhere, and they will continue to make their money from celebrity cookbooks, autobiographies, and massive IPs such as Harry Potter and Jack Reacher. Mainstream fiction is no longer theirs to control, however, and that’s a great thing for many reasons.

What has been the toughest challenge (apart from the writing itself!) in becoming successful author?

Staying power. Sales are in a constant state of decline, and it’s only willpower and ingenuity that lifts them. There are certainly good times in terms of sales, but the low points can take a lot out of you, and it always seems like a disaster when you’re there.

Why do you think apocalyptic (and post-apocalyptic) fiction is so popular?

Because it’s terrifying, and people like to be scared in a controlled environment such as reading.

Has COVID-19 changed that? I mean, don’t people want complete escapism when we are in the middle of a pandemic?

I don’t think the virus has changed what people enjoy reading, although it has given some people more time to read. If you liked apocalyptic fiction before COVID, then I’m guessing you'll still like it now. It’s make-believe, fun, and a great way to face fear head on, which is always healthy.

How did you go about publicising and marketing your first novel, ‘The Final Winter’?

I didn’t. I published it in 2011 with a homemade cover and that was enough. Things were a lot easier back then.

And how has your approach to publicising and marketing changed now?

I have spent over £150,000 on Facebook marketing now and my career has greatly benefited from that spending power. I was forced to learn online marketing in order to get people to find my books and buy them. I would prefer to focus on writing, but unfortunately the business is very competitive, and it takes many other skills to be successful.

What do you do when you can’t think what to write?

I can always write, and a little bit of thinking is all I need to get myself unstuck. Writer’s block usually comes from not having planned out your book well enough beforehand.

I read in one interview you did that Bookbub was (at that time) your number one sales promoter. I’ve just had a look at Bookbub’s charges. It looks incredibly expensive. Do you still use Bookbub much? Does it justify the cost?

Yes, I still use Bookbub. It isn’t as profitable as it once was, but I have never lost money on any of the two dozen deals I have had with them. For a writer starting out, it provides even more value as it provides a massive amount of new readers.

In your interview with Joanna Penn last year you said that Facebook advertising began as a disaster for you but ended up incredibly profitable. What did you change?

Honestly, I don’t know. It just worked the second time, and it’s never worked as well since. I remember targeting people with Kindles and that made a difference. I also chose to target other books than I did on my first attempt.

What about Amazon advertising? Some authors say it’s vital. Others don’t bother with it? What’s been your experience?

I have tried and tried, but it just doesn’t seem to do much for me. I still rely on Facebook ads.

Have you been able to figure out how most readers ‘discover’ you for the first time?

You give away a lot of your books? Why?

Because I can. I have over thirty now, so giving away books is a great way to entice people to buy the ones they don’t have. Also, it’s nice to give in such cut-throat times.

It’s vital. Vital. Look at traditional bestsellers and copy them. People look for designs they recognise and feel comfortable with, not fancy paintings or artwork. Each genre has certain conventions, and you ignore them at your peril.

Have you ever changed a cover and, if so, did that have any impact on sales of the book?

Many times, and yes. My first covers were comic book style digital paintings – and awesome – but they were all wrong. My covers now are more in line with traditional publishing and sales have increased.

When someone is browsing for a book on Amazon, you somehow have to convince them that your book is one they’d want to read. What do you think is the most important way to grab a potential reader’s attention – the book title, cover, blurb or something else?

Book Cover > Book Title > Product Page/Blurb > Sample Chapter/Preview = Sale.
If at any point readers are not convinced by any of these items, you don’t get the sale. Therefore, all are important.

If you were starting out all over again in your writing career, what would you do differently?

I would start a mailing list from day 1. It’s never too early to start gathering your readers into a place where you can influence 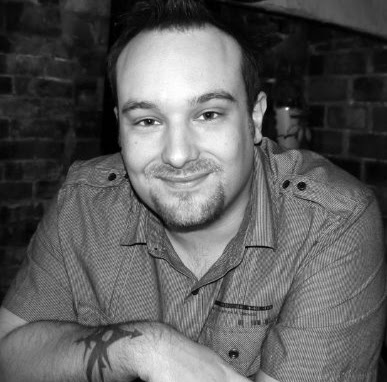 One of Horror's most respected authors, Iain Rob Wright is the writer of more than twenty books, many of them bestsellers.

Iain’s web site is : www.iainrobwright.com where you can get five of his books free!

Posted by Huw Collingbourne at 07:23

Email ThisBlogThis!Share to TwitterShare to FacebookShare to Pinterest
Labels: author interview, other people's books, self publishing