If you enjoy detective stories with a good dose of '80s nostalgia, Marshall Thornton's Boystown series of thirteen books may appeal to you. The series has an extra twist since the main character, Nick Nowak, is gay. In this interview, I asked Marshall Thornton about writing Boystown and other novels, and whether writing gay-themed novels provides any special problems for an author. 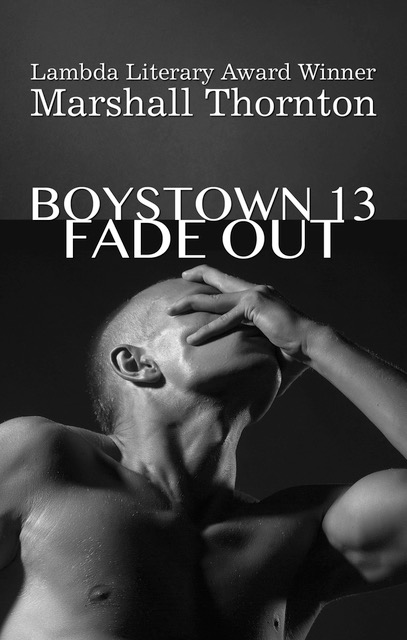 Was Boystown your first fiction book? What inspired you to begin writing the Boystown series?

Yes and no. When Boystown: Three Nick Nowak Mysteries was first published I’d already written drafts of The Perils of Praline and My Favorite Uncle. What happened was… I ran across a call for Christmas-themed gay erotica which, at the time, was a very unusual idea for me so I had to give it a try. I wrote The Christmas Visit for Torquere Press and enjoyed doing that. Then I wrote the first Nick Nowak story and sent it in to them. At the time, they had a glut of short stories and suggested I put three of them together in a book and that’s how the series was born.

Since a traditional publishing company used to publish your books why did you decided, later on,  to publish them yourself?

I have worked with four different small publishers. Two have since gone out of business. The decision to go indie was mainly financial. I lost a survival job and was able to get my rights back. I needed to turn my royalties into a more sustainable income and I have managed to do that.

Have you any regrets about being an indie publisher? Surely it must be easier and less time-consuming to let the publisher take control of all the book-design, marketing and so on? What do you think are the pros and cons of indie versus trad publishing?

Occasionally, you still run across prejudices against indie authors but here’s the deal: All writers are self-published. Even when you publish with a top-tier publisher you never work for them. They simply provide services to you and then take a portion of your royalties—often most of your royalties—in exchange. It’s a big mistake, in my opinion, to forget that they actually work for you and not vice versa. It’s also a mistake, a dangerous one, to believe that publishers are “gatekeepers.” They’re not. Publishers are for-profit-corporations. They make decisions based on what they think will make money, the quality of the book rarely factors into this.

As to whether it’s easier to let a publisher take control… I’ve seen writers fall prey to that fallacy. Once again, publishers are there for the money so if you’re making money for them they lavish attention on you. If you’re not making money for them they forget your name. So, if your book doesn’t make money right out of the gate (and very often they don’t) then you’re screwed because they’re not going to revert the rights to you and they’re not going to spend any money marketing you and they’re not taking your next book. It’s a tough business. For many writers it’s one book and out.
If I wasn’t an indie I probably wouldn’t have a career.

How do you go about writing? Do you have a fixed routine?

I try to work every day. Even on days when I don’t work it’s always there in the background. Sometimes not writing is writing.

I know you do a lot of research to help you recreate the period in which your books are set. Can you explain how you go about research? Is there anything you are particularly proud of getting right (or wrong)?

Well, I lived in Chicago in the eighties and Silverlake in the nineties, so for my series I work a lot from memory. I research, or confirm my memories, on the fly. I’ll stop and double check. (My super hero name is The Mad Googler.) I also skim through a lot of old newspapers.

The Boystown Mysteries and the Pinx Video Mysteries both deal a lot with AIDS and HIV. Much of the AIDS literature from the nineties was focused on New York and the Ivy League educated gay men who had access to publishers. In many ways, they were at the epicenter of the crisis and their stories are important for that reason. I’m proud that I’ve been able to add a different view. My books are more focused on people who are not at the epicenter and whose lives have largely not been written about. They’re more the everyman of the AIDS experience, I suppose. I felt their stories needed to be told. 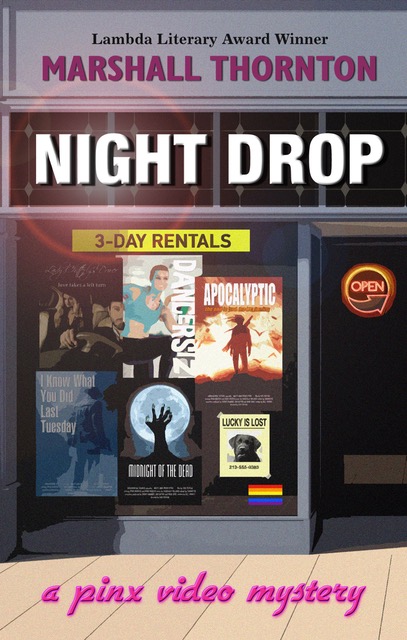 Your books have a fair amount of sex in them. Does that cause any special problems when distributing them on Amazon?

Many of my books have sex in them, though I’ve been moving away from that. I do have trouble advertising the Boystown Mysteries on Amazon. That’s mainly due to the covers. I have chosen artful nudes for the books to indicate that there is sex, that has prevented me from some advertising opportunities.

Most platforms restrict the amount of nudity you can have on a cover. Even when it’s relatively minor and tasteful.

Once upon a time, gay-themed books would have been regarded as very much a minority interest. Didn't you ever worry that you would be limiting your potential readership by having gay characters?

I’m not sure I agree with the “once upon a time” portion of this question. I would say gay-themed books still have a great deal of trouble with mainstream publishers. Or rather, gay-themed books from gay authors. The big publishers seem quite content to publish straight writers writing about gay characters. For example, The Long Call by Ann Cleves, Instinct by James Patterson, Love, Simon by Becky Albertalli, Red, White & Royal Blue by Casey McQuiston and the list goes on and on. You simply don’t see major publishers picking up gay writers like this and it’s truly a shame. This isn’t just speculation on my part. I recently tried to get an agent and was turned down, repeatedly—even with three Lambdas. I think that says quite a lot about the publishing industry’s relationship with gay men.

I hope I don’t sound bitter. I actually love my life right now. I support myself as a writer so I’m thrilled that we now live in a world that will give an indie author a chance. Sure, it would be nice to make the kind of money straight writers are making from gay-themed books. But that’s the way of the world.

In fact, are your readers all gay men or do your books have broader appeal?

As to my readers, I’ve always been on the fringes of m/m romance. Of the four publishers I’ve worked with three have focused on that genre. In case you’re not familiar, m/m romance is a genre largely written by heterosexual women for heterosexual women. Though I’m not a romance writer, I do get a lot of my readers from this group. And, I’ve also been discovered by a lot of gay men, often around my own age.

On your site, you have some interesting articles recommending writers of gay fiction. Some authors on that list didn't surprise me (such as Joseph Hansen who wrote the first Dave Brandstetter mysteries way back in the early '70s). The author that really did surprise me was Joe Orton. On the face of it, Orton's writing is far different from yours. Can you explain why you think Orton is so significant? What can a playwright teach a novelist?

Ah, Joe Orton. I have the better part of a theater degree (in addition to my English degree) and was a theater person in Chicago and L.A. for seven or eight years. I’ve always loved Orton, his plays are deliciously sexy and subversive and dark. I love that kind of farcical writing and do it occasionally, most notably in The Perils of Praline and Praline Goes to Washington. When I was in film school at UCLA I would alternate comedies with suspense scripts. I’ve begun putting these elements together with the Pinx Mysteries and my new series which I’ll mention later.

I think for many writers, the biggest challenge is finding that first small 'core' of fans. How did you go about finding your first readers?

This is where small publishers do help—provided they have a fan base of their own. They expose you to their fans and you gradually add to that base. Typically, you add readers with every exposure. I am still surprised though when people write a review an mention that I’m a new writer they’ve just discovered. I’ve been doing this for eleven years and feel like I’ve exposed myself—er, I mean—let people know I’m out there a lot.

Do you advertise (Amazon, Facebook, elsewhere)? If so, have you any tips on how to make advertising succeed without wasting money?

Let’s see. I do Amazon advertising on and off. It’s hard to tell what the return-on-investment is. They tell you how many books were purchased after click-throughs but it’s never really enough to justify the expense. That said, it’s hard to quantify how many books eventually get purchased or how many Kindle Unlimited reads happen based on repeat exposure. As for Facebook, I advertised there years ago when it was easy to boost, now I know nothing about it.

What else do you do to promote or market your books?

This summer I’ve booked six or seven pride events and I’ll be going all over Michigan and hand-selling. I’ve never done that kind of thing to this extent so we’ll see how it goes. Again, it’s not a direct return-on-investment but the exposure is good.

What's the secret of getting reviews on Amazon?

Time. I’ve always struggled to get reviews. My books with a lot of reviews have been available for a long time.

If you were just beginning your writing career today, what would you do differently?

Oh God. Everything. Nothing. Hmmmm. Well, it’s a different market than it was ten years ago. I think working with small publishers was valuable so I’d probably do that again… I think the one thing I’d do differently would be to let go of my survival job sooner. Once I began devoting all my attention to writing things really picked up. So, that’s the big thing I’d do differently. 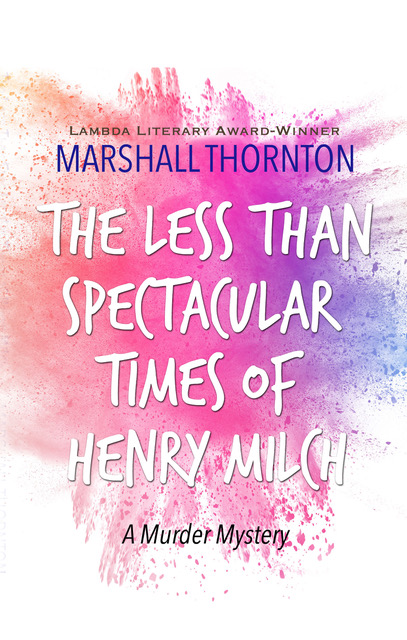 After thirteen novels, you've finally stopped writing the Boystown series. Can you tell me a bit about what you are writing at the moment. And what we can expect from you in future?

My next book is The Less Than Spectacular Times of Henry Milch due out April 28th. It begins a new series set in rural northern Michigan, which is where I now live. I plan to continue the Pinx Video books and will probably add a third series next year. 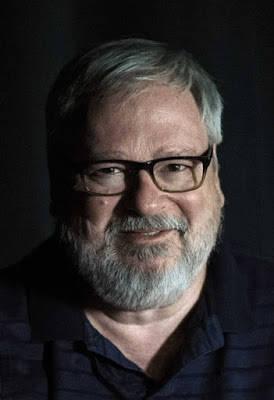 Marshall Thornton writes two popular mystery series, the  Boystown Mysteries and the Pinx Video Mysteries. He has won the Lambda Award for Gay Mystery three times. His romantic comedy, Femme was also a 2016 Lambda finalist for Best Gay Romance. Other books include My Favorite Uncle, The Ghost Slept Over and Masc, the sequel to Femme. He is a member of Mystery Writers of America.